Yesterday, I had a post on how medical school educated graduates manage diarrhoea.

Today, in outpatient, I had a 18 month old child who was being managed by a quack . . .  And below is the snap of the medicines, he has been on. 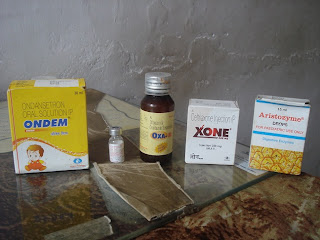 And this is his prescription . . . 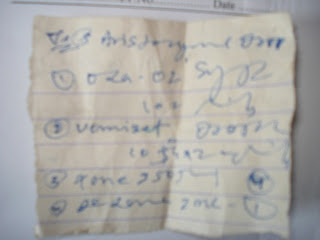 For those who could not understand the writing -

The parents claimed that the baby was also prescribed Oral Rehydration Solution . . . But, there was no sachet to be seen . . . They claim that the baby was initially better, but later started to have diarrhoea and vomiting since last night.

And the most interesting aspect . . . Similar to yesterday's patient, this young boy weighed 6 kilograms . . . instead of at least 10 kilograms which a healthy child of this age should have.
Posted by Jeevan at 4:42 PM