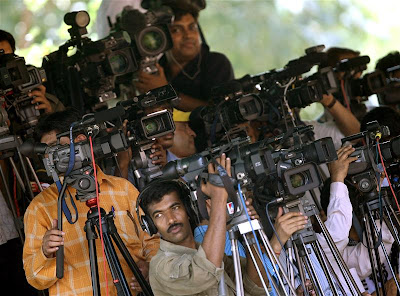 It was quite surprising that Mr. Shashi Tharoor was again on centre-stage all over in almost all media circles yesterday night. The reason . . . he had posted something on Twitter regarding the Delhi rape victim.

Yesterday night, the way the story was reported, showcased Mr. Tharoor as an uninformed ignorant person with ulterior motive. However today morning, with the family having obviously given it's consent for the same, most of the newspapers have backtracked and have been sort of commending the idea. This is a good article on how the media handled this.

The whole incident shows how thoughtless are our media and politicians. We under-estimate the capability of a person who was an illustrious diplomat and was in the running for the UN Secretary General whereas we are ready to accept statements of people who end up apologising most of the time that they were misquoted. We would rather get along with people who would state what we want to hear rather than hear someone who talks from one's heart with conviction.

And the media just waits to pounce on things. Everyone wants masala so that their viewers or readers would increase. The number of newspapers and news channels who publish real news are on the constant decline.

Well, it's not in the national scenario that media does not behave with responsibility.

In my routine clinical practice, it is quite often that I hear about patients threatening to call the 'patrakar' (the local journalist). I ask them to go ahead. During my first year here, there were few who tried to publish news against the hospital. However, when I convinced the local patrakars that they could end up in serious trouble if they published baseless news, they've left me alone.

One of the common practices in this part of the country is 'paid-news'. If you run an NGO, it is very common for you to call the 'patrakar' and give him a 'baksheesh'. The prominence, the news about your program will command is directly proportional to how much you pay.

I made a conscious effort to ensure that these guys are not called when we have big programs in the hospital. However, there is one problem. When we call some of the big shots in the government or administration, they usually ask where the patrakar is? I politely tell them that we usually don't invite the patrakar separately. However, they end up calling them up and they usually rush to cover the event.

Even, with this Delhi rape case . . . although I'm quite encouraged by the protests it could muster and the awareness people got after the media coverage. I wonder .. .. .. is it that we never had molestation against women? In fact, 2 young men (Keenan Santos and Reuben Fernandes) were killed in Mumbai when they went to protest against a young lady being molested. To make matters worse, I read that there were about 25 cases of reported molestations against women since the Delhi rape all over the country. However, you were not interested in following them the same way you reported this particular incident.

My dear friends . . . in the light of such incidents and experiences that we've had with the media, I propose that nobody of us believe much on what they say and publish.

And please do remember . . . there is another India, news about which does not make find many takers. Hope you remember the Banwari Devi case. I wonder why much fuss was not made for that poor lady. There are many more which go unreported . . .

Hope that you would be a voice for the voiceless rather than an amplifier which decides when to switch itself on or how loud and clear one should sound.