Late yesterday night, I was called for a second opinion about an elderly lady with burns on both her legs. The burns was already more than 3 weeks old. She was being managed at one of the plastic surgery institutes in Ranchi. I suppose they ran out of funds and therefore took a discharge against medical advice.

According to her discharge report, she was doing well and could be discharged. The plastic surgeon was probably waiting for a skin graft.

As per my colleagues description, the patient was quite sick and no intervention seemed to work.

The patient was gasping. She did not have fever. But, oxygen saturation was quite low. And she was anemic.

On examining the chest, it was obvious that she had a bad pneumonia in both her lungs. And it appeared that she had aspirated. I rechecked with the relatives.

I got a very interesting history.

Couple of days back, the patient had become a bit stuporous. Most probably because of the opioid analgesic she was on. Someone in the village suggested that she would do good with a some pomegranate juice. And that's what exactly they did.

The relatives pushed down half a glass of pomegranate juice down her throat. Most probably, quite a bit of the juice went into her lungs. 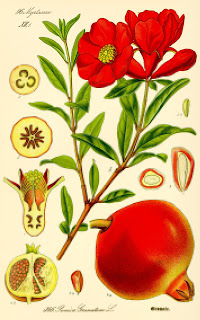 It is not uncommon among quite a lot of our patients to ask if they can eat pomegranate.

I don't advice it it too expensive and many a time, I fear that the ones we get in the market is quite laced with pesticides and some sort of wax is put on them so that they look shining and attractive. I'd rather advice them to buy bananas or dates.

I wonder if the pomegranate juice had caused her death.

I can never confirm as the lady was dead within one hour of arriving into emergency. Maybe a bronchoscopy would have confirmed.
Posted by Jeevan at 10:44 AM