This blog is a official post to thank the people behind the donation of the Bilevel CPAP machine to NJH.

The donation has been made in the name of Late. Mr. ARUMAI RAJ of 27/14B, Sinclair Street, Marthandom, Kanyakumari District. His wife, Mrs. JASMINE LILY consented to donate the machine to a hospital who will be benefited from the machine.

I would also like to thank Mr. N Jeyakumar of Sharon, BOC Street, Marthandam who facilitated this donation.

And of course, Dr. Manoj Job, former Junior Medical Officer at Premjyothi Hospital, Sahibganj District, Jharkhand who took all the pains to find a recipient of the kind donation.

I would also like to thank Mr. Manikandan from Trivandrum, who helped us with re calibrating the machine.

Of course, we've already used it for one patient, MD. MD came with severe breathlesssness. The diagnosis was a very bad stenotic valvular heart disease with had been undiagnosed for long. To make things difficult, she was in her third trimester of pregnancy. She was in pulmonary edema.

We could use the bilevel CPAP on her to really appreciable results. 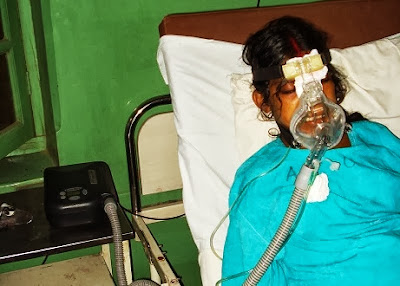 Once she became relieved of her breathlessness, we referred her to Ranchi. I could not get a snap of her before she left to Ranchi. She walked out of the hospital into the vehicle.

It was a blessing to have the machine with us as we avoided direct intubation and mechanical ventilation. As I wrote in my previous post, to get this machine as a donation after Dr. Roshine mentioned about acquiring one, was a big miracle.

I'm sure that the Lord will bless the magnanimous gesture from the family of Late Mr. Raj.

I hope that this would also be an eye-opener for others to donate unused or partially used medical equipment in good working condition to hospitals such as ours.
Posted by Jeevan at 11:30 AM