On diseases of the heart

Recently I chanced upon an article about an interventional cardiologist in the US, who has been sent to jail for performing unnecessary coronary angioplasties.

I was sort of transported 18 years back when a senior cardiologist in town had asked my dad to undergo cardiac surgery for a problem with a cardiac valve. I had just started my graduate studies in medicine. Therefore I had the privilege of getting in touch with friends who knew cardiologists. We decided to take him to a public care facility which had a cardiology department. The doctors there just put him on anti-failure medicines and told us that dad need not undergo the surgeon’s blade as of now.

We continued to take him for his routine check-ups every year. He had his last check up couple of months back and he is still on the good old medicines. Not many medicines . . . furosemide tablets and digoxin. And, it’s eighteen years.

The first cardiologist we saw had brought my mother to tears saying that unless we did surgery there was not much hope.

Couple of months back when I was at home, one of my cousins were telling about how interventional cardiology centres were sprouting all around the state. It was quite a good investment and returns were quite assured. There were stories about targets of the number of angiographies and angioplasties being given to the interventional cardiologists being employed in such centres. 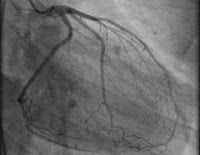 Coming back to NJH, about 3 months back, I had 2 patients who had undergone angioplasties. It is quite common for patients who have got angioplasties to have compact discs of the images of the angiogram and the procedure. However, I was surprised to find that they only had hand-drawn images of the artery blocks. I could not resist thinking on how true were the supposed artery blocks that both my patients had.

Regarding Dr. Mehmood Patel, he was convicted only because this happened in the US. The major news item today in India is about the record compensation that has been doled out for a case of medical negligence in Kolkotta.

Unnecessary medical procedures are something very rampant in the country. It starts with basic blood investigations. I’ve heard of laboratories within hospitals that have specific codes from doctors for tests which need not be done but are charged. The tests are charged, but not done and normal values of the same are recorded. Then there are investigations such as IgM/IgG for tuberculosis, serological tests done before the stipulated time (e.g. Widal test done on 1-2 day fevers), Erythrocyte Sedimentation Rate (ESR) etc. which are of no use to the patient.

There have quite a good number of uteri that are removed in the country for no reason. We’ve had news about such hysterectomies which were done under the Rashtriya Swasthya Bima Yojana. Then there are asymptomatic gall stones, tonsils, appendices etc which are operated on for no obvious reasons. And one should not forget the umpteen number of unnecessary Cesarian sections done.

News about Dr. Mehmood and Mr. Kunal Saha’s successful litigation should be a clear message for each of us in the healthcare profession to be truthful to our patients. This has far reaching implications.

On the lighter view, I remembered a anecdote . . .

‘It is common for elderly men from well to do families in my community in Kerala to unbutton the upper part of their shirt. It is usually done to show off the gold chain on the neck. That used to be during the olden days. Nowadays when they do the same . . . and it is done . . . to show off their bypass scars’ . . . However, with interventional cardiology, those days will also be gone soon.

I leave with a link to an article I read in The Hindu about Paul Dudley White, who is known as the founder of Preventive Cardiology as well the father of American Cardiology.

I’m sure that there is much more for the heart in terms of prevention of heart diseases than the sole choice of interventional cardiology.