Medical Education in India . . . A clarion call for Family Medicine as Specialty 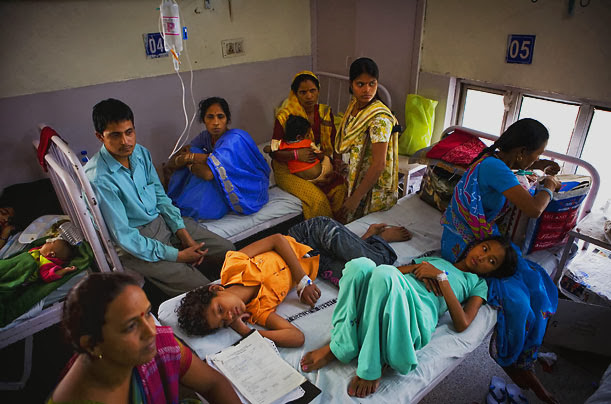 There are questions being asked about the propriety of healthcare being put in as a basic right of each of the citizens of the country. The result has been quite gruesome.

Basic health indices like Maternal Mortality Rate, Infant Mortality Rate etc. are so dismal in quite a many parts of the country that both the care-givers and the cared are well versed in sweeping adverse health events under the carpet. Latest reports say that we're in for real trouble with tuberculosis.

States like Kerala, Tamilnadu etc. have made major strides in healthcare whereas states earlier known as the BIMARU states, and presently designated as the Empowered Action Group states are a major blot for the healthcare prestige of the nation.

The question remains on how serious we are about this?

One aspect to look at is the healthcare manpower of states in general. I would like to start off with the availability of doctors in various regions of the nation. I do not have numbers from the respective State Medical Councils. However, there is readily available information about the number of seats for MBBS in the different states of the country.

Of course, I would have critics tell me that the presence of doctors alone is not enough to ensure that the nation is healthy. There are countries like Sri Lanka who depend more on nurses for primary care than doctors, thereby ensuring that healthcare indices are much better than even places like Kerala or Tamil Nadu.

Going back to availability of medical graduate seats in various states, I would like to draw your attention to the table below . .. …

b. I thought of looking at Gujarat as we have NaMo, the present Chief Minister claiming all qualities to don the mantle of Prime Minister after the next parliamentary elections. With a population which is almost double that of Kerala, Gujarat does neither have the number of Medical Colleges nor the MBBS seats that Kerala has. Poor marks for that, Mr. Modi!

d. I’ve not taken also into account doctors who are graduating from other countries and coming back to India. Experience says that the numbers of such doctors are also more from the better off states rather than the EAG states. And of course, doctors who would have spent quite a lot for their studies abroad will never be much inclined to serve the rural areas. However, I’m sure that there is no point blaming them as our graduates too do not prefer serving Bharat and instead preferring the shining India.

Now, I’m going to give another twist to this whole issue. Recently, there was a major statement from a leading healthcare professional about the need for more specialists in the country especially for the specialities of cardiology, diabetes etc.

Of course, with only measly group of medical graduates passing out each year in terms of requirement of the country, it becomes all the more tough to make them specialists in various fields of medicine. And the biggest question is whether we require specialists for each branch of medicine.

In one of my previous posts, I had explained quite in detail about the realities about availability of specialists in remote areas of the country, such as ours.

Here, I would like to look at how we would end faring if the situation remains status quo.

One major concern is poor obstetric care. Why don’t we look at the speciality of obstetrics?

Below is a very similar table to the one above. The only difference being that, we’re looking at the number of obstetricians that colleges in the same states churn out every year. 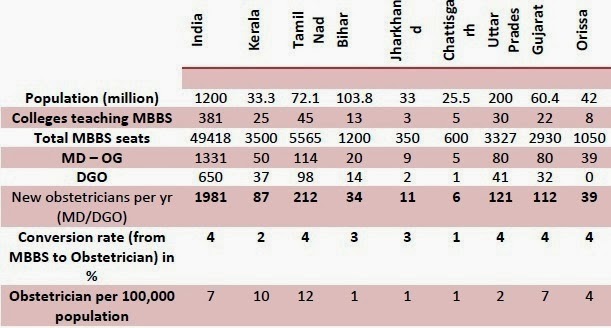 In a hospital setting where we have a sick baby, a mother for antenatal care, an elderly man for diabetic control, a mother in labour room who needs an emergency Cesarian section, we expect to have a Pediatrician, Obstetrician, Internal Medicine Specialist, and an Anesthetist.

I was trying to do some calculations.

Suppose one obstetrician can supervise approximately 200 deliveries in a month, which amounts to about 2400 deliveries in a year. In Jharkhand we have an approximate birth rate of 24 per 1000 population. Therefore, we would do well with one obstetrician for 100,000 population. Unfortunately, although this looks good when we calculate availability according to the number of post-graduate seats in obstetrics, it does not work well. For example, the region of Palamu, Garhwa and Latehar districts which has a total population of approximately 4 million has only about 10 obstetricians on paper. It should have had 40 obstetricians. I understand that practically, there are only 3-4 obstetricians in the region.

Now, according to rules, we need to have an anesthetist wherever there is an obstetrician. Below is a table showing status of anesthetists in the same states.

But, do remember that anaesthetists are not only required by obstetricians, they are needed to work alongside any of the different surgical specialities. So, the anaesthetists need to be much more than the number of obstetricians.

Now, if we apply the same rule to other conditions, we shall soon find out the enormous challenge that we have in our hands.

I’m sure that this is the case scenario for almost all specialities. All of us know quite well that the number of post-graduate training opportunities available to MBBS graduates is on the lower side. The National Board has tried to offset this shortcoming by arranging DipNB courses in private hospitals. There are challenges here which are beyond the scope of this article.

To complicate issues, on the healthcare side, the burden of non-communicable diseases is on the increase. There are calls for more specialists in the areas of diabetes, cardiology, oncologists etc. However, do remember that we still grapple with basic healthcare issues such as maternal and child health care, infectious diseases such as malaria and tuberculosis. For completion sake below is a table which shows the number of Internal Medicine consultants and cardiologists who pass out from the same set of states.

Availability of clinical care in rural areas of the country is a major issue. Of course, there needs to be major inputs into infrastructure development of public health facilities in all tiers of clinical care. States such as Tamil Nadu and Kerala has already shown us the way in this realm.

If one closely looks into the Kerala model of healthcare, one can very easily find out that the availability of graduate doctors in grass-root public health facilities, namely the Primary Health Centre and Community Health Centres has been one of the key reasons for healthcare equity. The challenge is to replicate this model in this era of specialisation.

And in Kerala, I find the justification about equipping PHCs and CHCs adequately. Because till about 5-10 years back, the total medical graduate seats in Kerala was not more than 800 seats. And still with that number, Kerala was successful in bringing to quite a certain extent in bringing about healthcare equity.

In the present era, considering into fact the reality that post-graduation is the norm in the field of healthcare, we are in a quandary. In addition, there is a fall in standards of medical education all over the country. It is not uncommon to find MBBS graduates who do not understand anything about clinical medicine and finds it difficult to practice. In such a scenario, a post-graduate speciality for training in general practice is very much necessary.

And this is exactly where a Masters course in Family Medicine would be of benefit.

For uncomplicated cases of pregnancy, do we need an obstetrician around to supervise delivery? For a routine care of diabetes, can we afford to have diabetologists all around the country? Even, for an acute cardiac event, are we entertaining the possibility of only a cardiologist managing the case? Of course, for the rich and the powerful, affording a specialist would not be an issue. The question remains of the common Indian citizen.

And this is where exactly a Family Physician would fit in.

In a situation where we can equip our Primary Health Centres with couple of Family Physicians, the workload on our referral centres would come down quite a lot. And the cost of healthcare would come down to quite a large extent.